Clearly this post calls for a picture, but I'll have to add it later. 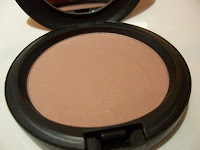 (edit: picture added)
MAC Beauty Powder in Softdew is an unassuming blush that doesn't show up at all if I swatch it on my arm, but shows up as a nice, subtle blush on my cheeks. I can layer for more definition, or apply lightly for a bit of polish. It doesn't really add much visible color, but nor is it really a contour.
Great no-brainer - I can dash it on and not worry too much about blending or overdoing it.

If I ever use this massive thing up, I'll probably repurchase, but I've hardly made a dent in it over a year, so I think it's unlikely that I'll ever need to buy a second one.
Posted by kuri at 12:09 PM No comments:


The first day of a new beginning.

Off to bed early. Tomorrow is the first day of the Haskell study group. Should be fun, but I may need some coffee.

It's a vivid pink and a bit too pigmented for me because it's so vivid. Still, a lovely color for summer, don't you think? It's moderately sticky and rather comfortable to wear.

I leave you with some swatches of banila co Banila Kiss in Raspberry. The lip swatch is rather sheered out.

Sorry that the blog has been pretty text-based lately. When things calm down a bit I'll post some cosmetic eye-candy.

By the way, Missha BB creams definitely irritate my skin a bit. They make it a bit itchy. I use oil cleansing and follow up with a toner (拭取る) but the irritation remains.

Angie, would you like to try it? It's a tube so it's quite sanitary. As a BB cream it seems average - not bad but not spectacular. Oil control is weak-to-average for me. Coverage is light-medium.
Posted by kuri at 2:03 AM 4 comments:

It's another hot, hot day in Tokyo.
Days like this make me realize how important it is to live in a place that has good air circulation (i.e. wind flow 風当たり). Of course, that's often difficult when buildings are built close together, meaning that convenient places tend to have less of a breeze.

Anyway, I came across some good articles clarifying some Java fundamentals. The basics are not necessarily simple.

Java is Pass-by-Value!
Specifically, Java passes object references by value.
* The above article includes a reference to an article explaining C++ Reference Variables, a good explanation of the general concept of reference variables.

* What is a daemon thread? When should I use setDaemon() and why?

Use thread.setDaemon(true) to tell the JVM to make the thread a daemon thread.

Queen's卑弥呼銀座店
The shoes are not cheap here; expect to pay more than 10,000 (sorry, accidentally wrote 100,000 which is incorrect, thanks lostinube!) on average. But they do have occasional sales.

Ginza Washington
They have a shop specializing in large sizes in Ginza also. Similarly priced to Queen's 卑弥呼, but perhaps a bit better quality.

In addition, 0101 department store (Marui) has a 01 MODEL floor on the 7th floor of the main building specializing in large shoe sizes for ladies. 新宿マルイ本館
Posted by kuri at 2:15 PM 2 comments:

a moment of silence