Sigh. I'm stupid.
I've been so out of it this week!

I borrowed a coat from a friend, and offered my coat to her, intending it as a loan. But I think she took it as a gift. I'm pretty sure she doesn't want the coat, and I kinda want it back. However, I don't really need the coat, so I'm tempted to leave things as they are.

But if she doesn't need it, I can just get rid of it. Well, maybe her niece can use it. I feel like it's not her niece's style.

I also gave her a gift that I have a feeling she doesn't really like :P Oh well. You win some you lose some.
Posted by kuri at 10:58 AM No comments:

Tibi x Bobbi Brown paisley tote bag - the last thing I need is another tote (I have 3 already), but this one is so pretty.

One Piece pouch - I'm not even a One Piece fan, but the pouch is apparently good quality, hence want! I will force myself not to buy it. Instead I'll get the Dip Drops pouch/organizer.
Posted by kuri at 2:09 AM No comments:

Do you ever collect a list of tabs in your web browser? Tabs of pages that you've had open for ages but you haven't actually gotten around to reading? And every so often, your browser or your computer crashes or Adobe sneaks in a restart (annoying!) and poof! All the tabs are gone. Although Chrome can usually recover in the event of a crash.

My current list:
http://www.engineyard.com/blog/2010/resources-for-getting-started-with-ruby-on-rails/
http://rubylearning.com/satishtalim/first_ruby_program.html
http://creativecommons.org/choose/results-one?license_code=by-nc-nd&jurisdiction=&version=3.0&lang=en
http://racket-lang.org/
http://www.linkedin.com/groupItem?view=&srchtype=discussedNews&gid=1834482&item=41934584&type=member&trk=EML_anet_ac_pst_ttle - this is a group discussion on linked in so may not be viewable to the public.
http://www.haskell.org/haskellwiki/Introduction
Posted by kuri at 3:00 PM 2 comments:

I am by no means obese, but I have been talking about exercising for years, and have not done much about it. So I found this woman's experience very valuable. She has five kids! I really have no excuse.

Wishing that everyone knows that they are loved.
Posted by kuri at 12:30 AM No comments:

I'm too lazy to use makeup brushes in general, as they require regular cleaning!
So for now, my fingers are the most eco-friendly solution.
Posted by kuri at 8:59 PM No comments: 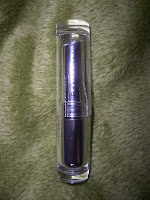 Jojoba's post on the new Shu Uemura Rouge Unlimited Supreme Shine lipstick prompted me to put some information about my older supreme shine lipstick up too.

I bought this lipstick in Taipei last summer. It's a new, super glossy lipstick line from Shu Uemura, in the old packaging.

According to a saleslady in Hankyu, this line was planned to be released in Japan last year, but they decided to revamp the packaging. 2 limited edition colors go on sale today in Japan, and the full line will be released in April.

WH 003 is basically a sheer, glossy, sparkly lipstick - good for making other lipsticks and glosses sparkly and a tad bit lighter in color. Great for evenings out. I really enjoy the texture, as it's quite light, but I find it a little rough and my lips tingle the tiniest bit when I put it on.

As you can see, the cap has already cracked in 3 places; it's a good thing they decided to revamp the packaging! It would be nice if they would replace my cap too, though.

Cosmetic Candy had the same issue with all three of her lipsticks! They should definitely give her new caps. My lipstick is tilting to the side too, as she mentioned. Hopefully the revamped version, which Jojoba has, doesn't have that problem.

As a lippy, I really like it. Just don't get the version with the flat top, stick to the new rounded cap.
Posted by kuri at 4:01 PM 2 comments:

Eloquent: Zach Wahls speaks about family
Posted by kuri at 9:46 AM No comments:

やりたくないのはだんだん分かってくるけど、いったい何をやりたいかはまだ不明です。
Posted by kuri at 11:39 AM No comments: