One of my favorite songs: Melanie Fiona - Change The Record.  I hope she comes to Tokyo sometime!
Posted by kuri at 3:56 PM No comments:

I confirmed today that the Japanese compact edition (文庫版) reprint of the manga With the Light 光とともに。。。 ended with book #10, which I've just started reading.  Unfortunately the manga artist passed away, so there are no further books.

A Japanese blog post that has links to scans of the Japanese article written by the manga artist Keiko Tobe-san.

I'm quite sad to be reading the last book on this story about raising a child with autism!
Posted by kuri at 10:35 AM No comments:

According to Bea's Up, the limited edition Cream Cheek Clear Type CL04 went on sale January 4th.  Cosme.net lists the name of CL04 as Clear Pink Joy.  I'm not sure, but CL03 Clear Sunset may no longer be limited edition.  I'd say that CL04 Clear Pink Joy is somewhere between CL02 and CL03 - more coral than CL02, but less so than CL03. 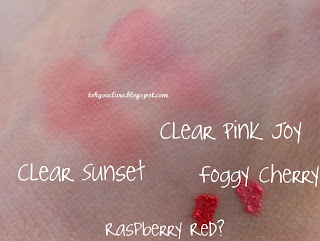 The display at my local beauty store has both CL03, CL04 (definitely LE), and the Whip Mousse Lip in LE 04 Foggy Cherry.

I've hardly made a dent in my other blushes, including 2 Cream Cheeks, but I'm still tempted to pick these up.  Time to do another color inventory and then see.
Posted by kuri at 1:17 AM 4 comments:

Places to get your shoes polished around Tokyo:

Prince: When Doves Cry
Posted by kuri at 3:07 PM No comments:

A comprehensive guide from Perfume Posse.
Posted by kuri at 2:02 PM No comments:

What is American food?

Here's an interesting discussion on cuisines in the U.S.
Posted by kuri at 2:56 PM No comments:

Bad experience at the makeup counter

I spent too much time fuming about my experience last night at the Laura Mercier Counter in Mitsukoshi Ginza, so I'm going to just vent here and move on as fast as possible.

I've never spent much time at the Laura Mercier counters in Tokyo, mainly because there are so many other flashier brands.  And after yesterday, I don't think I'll be inclined to go near one for a long time!

This weekend, I bought the Laura Mercier mook, which came with a generous voucher for a little fan brush, a small sample pot of powder (perhaps the brightening powder), and a sample tube of hand cream in one of the 4 permanent scents (other than Creme Brulee).  It's been a full 2 months since the mook came out, so my visit yesterday was very late for trying out the voucher, but I went to the Laura Mercier counter at Mitsukoshi Ginza 三越銀座 and inquired.  They'd run out of the other items but the sales assistant (SA) offered me a sample of the hand cream if it was okay with me.  I selected Coconut Almond to try.  She asked if I'd like anything else, and I said I'd like to try out the brightening powder ”パウダーを試したいんですが。。。”.  She misunderstood me and repeated quickly that they ran out of it a month ago at Mitsukoshi so they didn't have any samples left.  As she'd already said they ran out of it, I had actually meant that I wanted to try it out directly at the counter, but I was rather taken aback by her repetition of the previous information and her polite implication that I was being too persistent.  Since she apparently hadn't been asking if I was interested in other products, I was a bit confused as to what she was actually asking for, so I asked if there was anything else I could select; I suppose this reinforced her impression that I was stupid.  She went off and got me the sample hand cream; I thanked her, and then went to poke around the displays.  However, it seemed like she wanted to get rid of me, as she followed me around, ignoring the other customers browsing, and replied to my questions as if I was stupid ("We have two types of concealer, one for under the eyes, one for in general"), so I gave up in the face of her hostility and ran off to find shelter at the Suqqu counter.

The Suqqu SA was so nice in contrast!  It was a great balm to my wounded psyche.  She showed me swatches of the quads and offered to apply the eyeshadows on me.  As I had lost the desire to browse, I politely declined and said I'd come back when I had more time, and she offered me a flyer, telling me that they would have new products out in Feb.  The ladies at Laduree were also charming and friendly.  They have the sweetest uniforms.

A month ago, when I had a voucher for a mini nail polish at Addiction, the Tokyu dept. store SA was super gracious, even though I didn't have time to shop around and try out products then.  So I really don't understand the attitude of the Laura Mercier SA.  It's a pity, as I like the Mercier approach to makeup, and the markup of the products in Japan is not as obscene as other foreign and domestic brands.  However, I would rather have avoided the whole unpleasant experience instead of getting the free sample of hand cream.

On the bright side, this has totally killed my desire to continue shopping during the new years sales, so my wallet is happy.

I ended the day with some fruitless clothing shopping and a stop at the Pandan Leaf Cafe in Printemps Ginza.  The egg tarts and rare cheese tarts are excellent!  The kaya toast is pretty good too, but it's quite different from what they serve in Singapore (toast is thicker and not as crispy at Pandan Leaf Cafe).
Posted by kuri at 10:43 AM 4 comments:

From Country: Cracklin Corn Bread
Unhealthy but it looks delicious!  I like the spoon method of pouring the batter.  I might try with bacon sometime.
Posted by kuri at 2:05 PM No comments:

Add Clarks to the list of shoe stores that only carry up to size 25 cm for women in Japan.  The last time I checked, Castaner also only carried up to size 25.  Considering the fact that these companies manufacture larger sizes, I really don't understand why they don't bother importing them to Japan.  They could even do it on demand when there's a request from customers.
Posted by kuri at 5:53 PM No comments: